I can’t think of anything that brings me closer to tears than when my old dog — completely exhausted after a hard day in the field — limps away from her nice spot in front of the fire and comes over to where I’m sitting and puts her head in my lap, a paw over my knee, and closes her eyes and goes back to sleep. I don’t know what I’ve done to deserve that kind of friend.” – Gene Hill 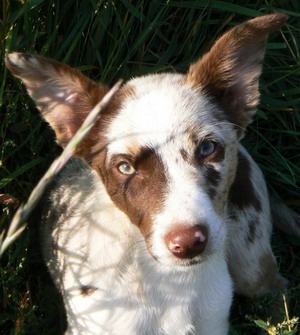 As you might expect, the Australian Koolie hails from Down Under where it has been established for nearly 200 years. Among its ancestors are German herding breeds and Scottish Collies brought with German immigrants to Australia. This ancestry might explain its other name, the German Coolie. Whatever its name, the Koolie is an animal prized for its skill in various herding techniques.

Bred to drive cattle over varying terrain and distances, Koolies use several methods of controlling the herd: heading (pushing the stock back towards the farmer from the front), heeling or driving, (guiding the stock from behind), casting (moving out and around the stock), blocking (holding or blocking the stock from in front) and backing (jumping onto the backs of the animals to herd them).

Koolies are very versatile and easily work in closed surroundings such as yards or trucks as well as out in the open in paddocks. Koolies will herd anything from ducks to bulls, a good thing to keep in mind as this strong drive will lead them to herd other family members and children in the absence of real work.

As these dogs are bred to work in a variety of environments, their physical appears varies also. Standing from 16 to 24 inches (40 to 60 cm) tall at the shoulder and a little longer than they are tall, Koolies also vary in coat type.

The coat may appear short and smooth (similar to Blue Merle Smooth Collies) or medium to long (like Border Collies). The short/smooth coats are low in maintenance.

Colouring also varies. The coat may be solid, “bi” (black and white or red and white), “tri” (solid red or black, with white markings, normally with brown points), “tri merle” (same description but merle), or “merle” (grey, black,red/chocolate or white undercoat with large areas of darker colourings of red/chocolate for red merles or black and grey for blue merles).

Agile, adaptable, and intelligent, Koolies need early, supportive training and socialization to help them adapt to the specific needs of their owners. They respond quickly and confidently. This is a high drive, hardy, enthusiastic dog who needs a job to do! Koolies excel in sporting activities, service, search and rescue, or as loyal companions. Patient, dedicated, and devoted, Koolies outside the farm or ranch compete in herding, obedience, tracking, jumping,and other dog agility events.

Koolies are a long lived breed with an average life span of 18 years.