Chewbacca,
the hairy Wookiee in the Star Wars movies, was inspired by George Lucas’ dog “Indiana”, an Alaskan Malamute.

Their tails are high and tongues awag — the twin banners of sled dog contentment. – Clara Germani

The oldest of the Arctic dogs, the Alaskan Malamute was developed by the nomadic Mahlemuts, an Inuit tribe of northwestern Alaska. They first came to the North American continent some 1,000 years ago. A 2013 study confirmed the Malamute is of east Asian origin.

Originally bred to haul heavy freight, the Mahlemuts also used their powerful dogs to pull sleds and pack supplies. The Malamute was prized as a hunting dog and were used to hunt and track large predators, including polar bears.

They were also able to find seals by searching for and locating seal blow holes. With such abilities, these dogs helped their tribe to survive the incredibly harsh Arctic landscape. They worked, hunted, and lived alongside their humans.

These strong, heavy haulers were used to pull sleds during the polar expeditions and during the settlement of Alaska. They accompanied Rear Admiral Richard Byrd to the South Pole.

In 1896, gold fever struck and the Malamute was prized for his ability to haul the heavy gear required by prospectors hoping to strike it rich in the Klondike Gold Rush.

In 2010, the Alaskan Malamute became the official state dog of Alaska.

Today these dogs are still happiest when pulling a sled or a cart.

Another member of the Spitz family of dogs, the Malamute is large and powerful. He stands 25 inches (63.5 cm) at the shoulder and weighs approximately 85 pounds (38.5 kg). He has a thick, coarse, double coat that ranges in colour from light grey through intermediate shadings to black, sable and shadings of sable to red. The coat may also be solid white.

The Malamute carries his furry tail curled up over his back like a “waving plume”.

Sometimes confused with the Siberian Husky, the Alaskan Malamute is a much larger dog, built to endure an unforgiving climate. In addition, he always has brown eyes, the darker, the better whereas the Siberian Husky’s eyes can be blue or brown, or even one of each.

The appearance of the Malamute always supports their original function as a sled dog for heavy freighting in the Arctic. A dog that was born for winter, the Malamute prefers colder climates although he will adapt to warmer environments. 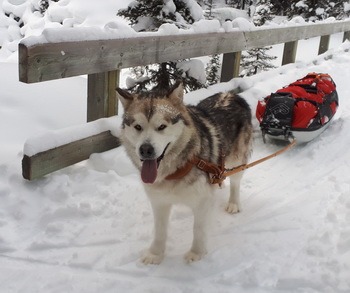 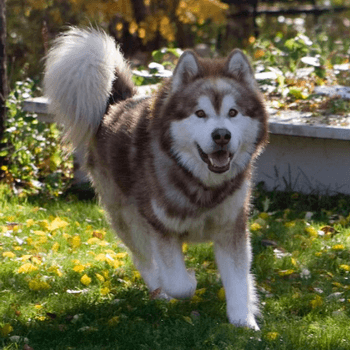 Despite his intimidating size and appearance, the Malamute is not a guard dog. He is friendly, affectionate, active, but not a “one man” dog. He is a loyal, devoted companion, willing to play while still appearing dignified.

Exuberant by nature, the Mal is good with children. As with any of the larger breeds, the Malamute should be supervised when playing with young children due to his size. A family-oriented dog, the Malamute loves being with his people.

However, he should be in a single pet household. This breed does not tolerate other small pets well and can be highly aggressive towards other dogs.

The Alaskan Malamute is a self-confident, strong-willed dog who learns quickly but is easily bored. His owner may need to exercise extra patience during training. Obedience training should begin early.

These are active, energetic working dogs who require a lot of attention and outdoor exercise. They live best in a cool, country environment where there is lots of space.