An Italian white wine, Pinot Grigio Canlungo, has a picture of a Dachshund on its label.

I would rather train a striped zebra to balance an Indian club than induce a dachshund to heed my slightest command. – E.B. White 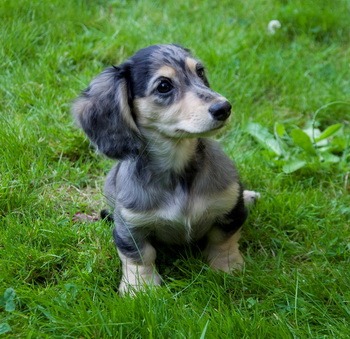 Miniature Dachshunds were bred in Germany specifically to hunt badgers but were also used to find rabbits and foxes. The Dachshund’s name describes this purpose. “Dachs” is German for “badgers” and “hund” is German for “dog”. Since the 1500s, Dachshunds have been used to hunt badger by following them into their burrows. His long body and short legs ideally suit him for this job.

The original dog was the Standard Smooth Dachshund and all other dachsies were developed from this dog.

By the late 19th century, German hunters were breeding down Dachshunds who could be used to track smaller game such as the European hare which lived in smaller burrows than the badgers and foxes hunted by the larger Dachshunds. These “miniature” Dachshunds were bred small enough to be able to go down into the rabbit’s burrow.

The Miniature Dachshund weighs no more than 11 pounds (4.5 kg).

The three coat varieties of Dachshund are: long haired, smooth, and wire-haired. The long haired dog has silky fur reminiscent of an Irish Setter that can be in solid red (often called tan), red-yellow, and yellow. He may also have a two coloured coat in deep black, chocolate, grey, and white; each with rust-brown or yellow markings, the most common being black and tan. The long haired Dachshund may also be brindle.

Despite his size, this breed has terrier-like qualities and likes to be the boss! He can also be courageous to the point of recklessness. He is clever and lively and may be stubborn and dominant. However, the Dachshund is also friendly, playful, alert, and spirited, and makes a terrific companion. Children should not be allowed to roughhouse with this dog.

Because of his temperament, the Miniature Dachshund requires early and consistent training from a strong, patient, take-charge master. If spoiled, he may become snappy. Training can be difficult and may require extra time and patience. Early socialization is a good idea. 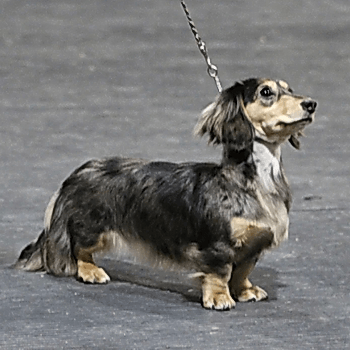 A fenced yard is a must as the Miniature Dachshund has a great sense of smell and will wander off after any interesting scent. Keep an eye on your garden too. Dachshunds’ hunting heritage may lead to digging in the yard. Housebreaking may be challenging as many of these comfort loving dogs don’t like to go outside in cold or wet weather.

Of the three varieties, the Long haired Dachshund tends to be the quietest and have the sweetest nature. Perhaps that is a throwback to its sporting dog ancestors.

Dachshunds require regular exercise to fight a tendency to become overweight. This is particularly important as the Dachshund’s body shape does not support extra weight well.

If regularly exercised, this dog can live in an apartment. However, it should be noted that the Miniature Dachshund makes a good watchdog as he can make a surprising amount of noise when barking! Apartment building neighbors may not appreciate the noise!

The Miniature Dachshund Club of BC